Dave Siever first got involved in AVE when he was designing a research lab to diagnose and treat TMJ Dysfunction in the Faculty of Dentistry at the University of Alberta with Dr. Norman Thomas (now teaching in Vegas). While Dave was there, an instructor from Performing Arts commissioned him to design an AVE system for him to help his students overcome stage-fright. Given that Dave was up to his ying-yang building the lab and performing TMJ studies, all while teaching a Basic Human Physiology course at the same time, he was hesitant to accept any new projects. But he did it anyways, and boy, was he glad he did! 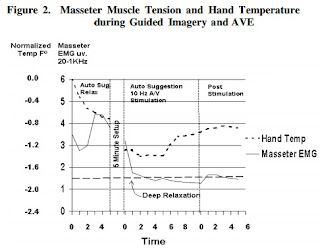 The Performing Arts instructor was pleased with the results he was getting with his students, but Dave remained somewhat unconvinced of the power of this new-age fad called AVE until 1988, when he ran a study with some of their most difficult TMJ patients they had seen yet. Astonished, Dave looked on as the DAVID 1 was able to eliminate masseter muscle tension (as measured with EMG), plus it was able to induce hand-warming (a sign of sympathetic reduction). It was this observation which first got Dave very interested in the topic of AVE.

After scouring the U of A Health Sciences library, Dave discovered that photic and auditory driving had actually been around for a long time. Since the concept of photic driving was discovered by Adrian & Matthews in 1934, several thousand studies have been published on the topic of AVE. In the 1950s, there was a growing interest in the subjective effects of AVE. W. Gray Walters exposed several thousand subjects to photic stimulation at various frequencies and recorded their subjective experiences. On another front, was Dr. William Kroger. Kroger was a physician with the US military and Kroger noticed that battle-ships and bomber-planes were being driven into enemy territory because the radar operators were being entrained into a trance state from the old-fashioned “blip” style radars. This spurned Kroger to team up with Sidney Schneider of the Schneider Instrument company and they developed the first commercial photic stimulator in 1955, which they used primarily for hypnotic induction and pain reduction during gastro-intestinal surgery and dental work. 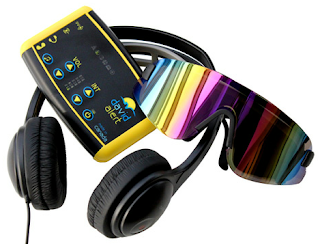 
In 1988, Mind Alive was awarded a patent on field-independent stimulation eyesets, which enables the user to stimulate each brain hemisphere at its own frequency, via the optic chiasm. This provided a technological upper hand for Mind Alive Inc., in that we could dramatically boost our effectiveness in treating ADD/ADHD, cognitive decline in seniors and alpha asymmetry (a type of depression).

Close to 100 clinical studies have been published on AVE, and more than twenty studies have been conducted using our DAVID products for ADHD, seniors, academic performance, worry in college students, and depression. There are roughly 70 schools using our products for ADHD and behavior disorders. The DAVID devices are currently being used to treat PTSD in several VA centers in the United States. Dave has published several articles on the topic of AVE and has written two book chapters in college-level psychology texts.
Click here to see Dave's articles on AVE