Over the years, some of our customers have been requesting that we upload the ALERT-ADHD sessions into the Pal36 with CES and the Delight Pro products, as they found that adding CES boosted the effect of the AVE on their clients.

So I decided to investigate the research on CES as it relates to ADD & ADHD. I was impressed enough to take action. So, Mind Alive has decided to make the ALERT-Pro, an ALERT with CES added. Here is the research that we used in deciding to add CES to the ALERT.

Children with ADD/ADHD and behavioural disorders (BD) often struggle with compounded issues such as insomnia, depression, anxiety, poor cognition (mental performance) and a tendency to experiment with drugs. There are several studies using CES to help with these concerns, as shown in Table 1. Parents and clinicians using the ALERT are experiencing very positive results and those that have used AVE with CES say that effects are enhanced when using both together.

A study by Ray Smith (1992), of 23 ADD children using CES for 45 minutes per day for three weeks showed profound effects in reducing state anxiety (anxiety in the moment) and trait anxiety (overall anxiety) and depression (Figure 1). A follow-up after 18 months showed that the effects were still holding quite well. Ray also measured IQ and found significant improvements (Figure 2), which also held over 18 months. 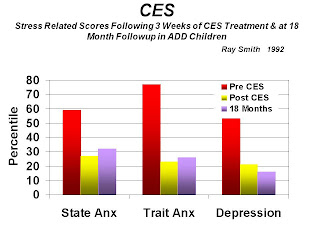 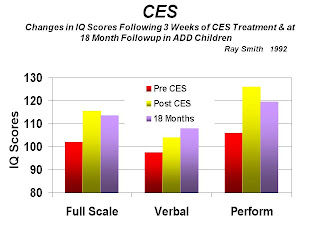 A 1999 controlled study (n=21) by Susan Southworth, on attention and concentration of normal students found that one session of CES for just 20 minutes improved attention by 31%, whereas the placebo group improved by only 4%.

Conclusion
There certainly is ample research demonstrating the effectiveness of CES for treating both mood and performance, which may be used as an adjunct to AVE stimulation.

Comments:
Excellent content ,Thanks for sharing this .,
Leanpitch provides online training in CSPO everyone can use it wisely.,
Join Leanpitch 2 Days CSPO Certification Workshop in different cities.