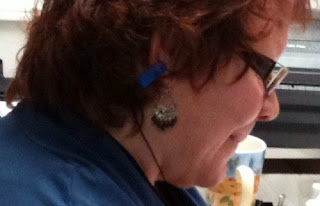 Cranio Electro Stimulation (CES) seems to have a pretty scary ring to it, no? Safe for everyday use? You betcha! Here's a picture of Mary Anne in shipping using her CES device at work. Carol at the front desk can also be found sporting CES. I mention this because recently Mind Alive launched it's latest and greatest CES/transcranial device, the Oasis Pro.
To give you a bit of background, Dave likes to make these weird punny jokes that only appeal to him and probably Duncan, our tech (he's also great at pumpkin carving, design and marketing). I laugh to be polite. CESta was the precursor to the Oasis Pro which was going to be named (sucCES), but everyone else saw SUC first. In the end we all know which one, won! Duncan did a fantastic design job. He runs a very democratic ship as whenever he designs something he does at least 4 choices and then we all vote. What you see is the winning name and designs :)
This month has been great for the debut sales of the Oasis Pro! People really like the new design and the easy to use interface.
NEW OASIS PRO!

We are very excited to introduce our new CES device, the Oasis Pro. This Oasis Pro will replace the CESta, which has been discontinued. For quick reference, here's a list of the differences between the CESta and the NEW Oasis Pro
The features that were dropped were rarely used and added unnecessary complications to the CESta.
The new interface is one of the biggest improvements. You can easily pick both the length of the session and the frequency type of the session without having to refer to your manual.
Also, tDCS has been made a full feature, with its own display to remove confusion around what type of session you are running. This will completely eliminate the problem of users selecting the wrong library of sessions and running tDCS when they wanted to run CES (and vice versa).
Operation of the unit is very similar to that of the Delight Plus/Pro.
Get yours today!