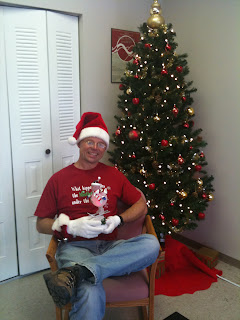 Today was our staff Christmas party. Typical Christmas potluck ate too much and had a cute gift exchange.We had a lot of fun releasing dopamine and as Dave would say.  If he looks comfortable as almost Santa in this pic, Dave plays Santa for little kids during the holiday season among the thousands of other things he does :) The snowman he's holding actually glows red and blue, so definitely a Mind Alive Christmas mascot. Over the weekend everyone went to Jubilation's dinner theatre. From the postings on the white board sounds like everyone had a great time. I couldn't go unfortunately due to other commitments.

The office will be closed be between Christmas and New Year's, though I'll probably still post, because I'll be making my family try the AVE to see how they like it including my brother who has epilepsy. Not to worry! In the hospital they tried to induce seizures using flashing lights, but that didn't work. When he has seizures it's only once per year anyway and my mom is a nurse, so we're covered. My dad has a health spending account from his work and I'm curious to find out if it will cover the AVE, since it's a class 1 medical device in Canada. It covers bikes and treadmills so I would think it'd accept the AVE.

Mind Alive has been awarded a patent on a field-independent stimulus, which allows it to activate each hemisphere of the brain at its own frequency through optic optics. It provided a technology upper hand for Mind Olive Inc. This office will be closed between Christmas and New Year, although you will probably still post, because you will try to show my family how they like it. Brother who has epilepsy.
photo frame ornaments